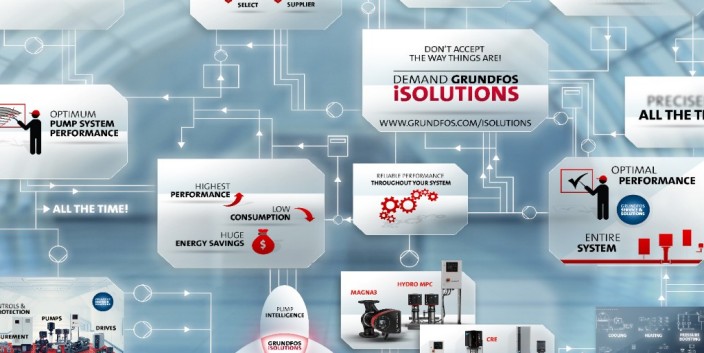 In May 2017, Fredrik Östbye accepted an assignment: carry out the smartest and most intelligently executed digital transformation of any industrial company. The challenge came from world leading Danish pump-maker Grundfos – looking to shift from selling pumps to providing water-as-a-service. Three years later, the transformation is complete.

When Fredrik Östbye accepted the assignment as Group Vice President and Head of digital transformation at Grundfos, he was given a time frame of five to six years to execute the transformation. That’s too long, said Östbye, “we need to do it in three.

To succeed, Östbye realized that Grundfos would have to do things in a different way. If you want to do something smarter than others, you have to do it differently. Östbye had seen other companies struggle with digital transformation and had a good idea of what not to do.

“We did not want to set up a separate unit that would come up with new ideas. That’s what most other companies do. Instead, we said: let’s look forward. What will our company look like in five years? What capabilities do we need to build to get there?”

Together with CEO Mads Nipper, Östbye identified five capabilities that Grundfos needed. The first was digital engineering. “How can we use digital tools to design our products faster? How can we use the data from our products to understand how to do things better?” explains Fredrik Östbye.

The second was data analytics. “How do we analyse data from many different sources to create new valuable services for our customers and end-users – and to create tools for our own service delivery, so we can develop the product water-as-a-service?”

Partnerships and ecosystems was the third capability Grundfos required. The ecosystem around water supply and other utilities is changing quickly, and Grundfos needs to take a position in the new landscape. “How can we join the ranks of the big players? And how can we collaborate with smaller enterprises to speed up our innovation?”

Capability number four was called “go-to-market”.  Selling water-as-a-service is quite different to selling products through distributors.

The fifth capability Grundfos would have to acquire was as-a-service delivery. “We need the capability to deliver our offerings as a service, instead of products. That’s a huge change in our set-up”, Östbye explains.

So how would Grundfos be able to establish these five capabilities in just three years? Fredrik Östbye and CEO Mads Nipper set up a masterplan: In year one Östbye was to create the foundation and a team that could lead the transformation; in year two, the team would prepare for scaling, focusing on scalability right from the start; and in year three the job was to scale up.

Fredrik Östbye and Mads Nipper agreed to place two important conditions to Östbye´s role. Firstly, it was temporary; the head of digital transformation was to work for three years, then the role would be terminated. Secondly, there would be no business unit created for digital. Instead, Östbye’s job was to invest in existing units, upgrading their capabilities.

“In large companies, there is a lot of politics. People build kingdoms. We saw in other companies that when a CDO was appointed, he or she hired people to build a business unit. That meant competition between existing business units and the digital unit.”

Choosing a different path was a key for success. “Knowing that I was only there for three years to help upgrade them, and that I had a budget to accelerate their capabilities, the business unit managers wanted to work with me, not against me.”

Another challenge that needed to be addressed was the fact that there was little contact between the different departments. “Large corporations often consist of silos that barely speak to each other. To carry out this transformation, we needed to break down the silos.”

His solution was to build a digital factory and collaboration space – a physical space created in an old factory – to which Östbye invited people from different business units and departments to join. “Our focus in this collaboration space was to build a foundation for change, the first digital platform to connect our products and start delivering the first digital services together with our clients.”

“There are a thousand ideas in a big company, but if you invest in many different things, nothing will happen”, Östbye says. The next step was deciding what to invest in. What projects should be prioritized?

Fredrik Östbye has a background as a serial entrepreneur, a fact which has likely been essential to the success of Grundfos’ transformation. When he joined the Danish water pump-giant at the age of 44, he had already started and sold two companies in his career. The last company, iOWA, was sold to Nordic telecom giant Telenor, where he stayed on after the acquisition and learned how large corporations work.

An experienced entrepreneur, Östbye was used to making tough decisions when deciding how to prioritize his resources. A start-up needs to select exactly the right areas to focus on or it will not survive. He criticizes the tendency in large corporations to let projects run for ten or fifteen years without showing results. With a three-year timeframe, that was impossible.

“We scanned through the pipeline of ideas and selected a few that we believed in. We put everything else on hold and focused on those things. Then we had to be agile to figure out whether our selection was right.”

The projects were evaluated by Östbye and the business managers. One was closed down during the first year, and a new one was started.

Disruptions the basis for selection

The ideas selected were focused on the two possible disruptions that Östbye saw which could threaten Grundfos:

The first was that a new player could enter the market for condition monitoring and predictive maintenance, by placing sensors on the pumps of Grundfos’ clients. “They could take the entire aftermarket. They could squeeze our pricing, and Grundfos would be commoditized forever.”

The second disruption Östbye envisaged was the development of digital layers on top of things, like smart factories, smart buildings and smart cities. These cities will have a “brain” to which all infrastructure is connected through IoT-technology. If one player takes the lead in delivering a solution for entire smart cities, other suppliers will have to find a position in the new ecosystem that has been created.

“Since we deliver pumps to both buildings and water infrastructure in cities, this is both a possibility and a threat. If we don’t understand how the digital ecosystems are formed, we risk being eliminated from the market. We need to be a player in smart water infrastructure, or someone else will take that position. And it’s happening now.”

An important new partnership is that with Chinese digital giant Alibaba. The Chinese government has given Alibaba the assignment to create smart cities in China – an initiative which has been named “City Brain”.

Partnering with smaller tech companies helps Grundfos innovate faster, and it gives the partners the skills and speed they need to move forward faster. Grundfos’ experts have now trained Augury´s AI. “A few months ago we launched the best solution for condition monitoring on the market. We beat all our competitors.”

“The whole board went to China to visit Alibaba. In December, we set up an office for local development in Shanghai where we work together with Alibaba and another partner.”

Now, Fredrik Östbye’s third year is coming to an end. So is the digital transformation complete?

“We are satisfied with the results. That doesn’t mean that Grundfos has done everything it needs to do, but my role as a change agent is no longer needed. The different units within Grundfos are well progressing with the new capabilities, and I can pull out of the process.”

But the task was not only to lead a digital transformation, but also to make it the smartest one ever in an industrial company. What does Östbye think of that now?

“When we ask others, which is necessary when trying to answer that question, they confirm that we have succeeded. Consultancy companies we have talked to are saying that Grundfos has conducted the quickest and most impressive transformation they have seen.”

Two things make Grundfos’ transformation process unique: Firstly, they upgraded the existing organization instead of creating a new one; and secondly, the fact that Östbye’s role was limited to a period of three years. “These two factors have enabled us to avoid internal power struggles and to speed up the transformation. My recommendation to other companies is to do the same.”

But the termination of Fredrik Östbye’s contract as head of digital transformation does not mean he is leaving Grundfos. Instead, he is embarking on another change journey within the organization: to revive its capability to innovate.

“Historically, Grundfos has been a highly innovative company and a pioneer in the pump industry. But in the last ten-fifteen years, we’ve not come up with any game-changers. That means our traditional competitors are catching up. We are good at improvements, but we need to increase our capability to make radical innovations. Innovations that change the rules for a whole industry.”

Instead of being best at making pumps, the vision for Grundfos is to be pioneers within two of the biggest challenges facing humankind right now: climate change and water.

“We will work with innovation internally as well as with partners that share our hypothesis. Our focus is speed and collaboration. We will build a number of high performing teams that will continue creating an environment of internal start-ups”, Östbye says.

Again, he will be using the start-up methodology of selecting a few ideas to invest in – three, rather than twenty. “It has worked really well in our digital transformation. Now we are reusing the same methodology for radical innovation.”

There were, as always, managers who were unwilling to participate in the transformation. CEO Mads Nipper handled this by replacing them.

Östbye has also worked directly with the Grundfos board, as a member of the company’s technology committee. The committee consists of the board, the executive management, a handful of external delegates with leadership or board positions in other companies and Östbye as a representative of digital.

Fredrik Östbye and CEO Mads Nipper have collaborated closely throughout the transformation process. Östbye reports directly to Nipper, and they have met every month to follow up on the progress.

The transformation was initiated by the board, who appointed Mads Nipper as CEO in 2014 to push the company’s global growth. Monitoring its progress of the transformation has been an item on the agenda of every board meeting since Östbye came to Grundfos, and Nipper and Östbye have taken turns reporting the status to the board.

The fact that the change has been top-driven has been essential to its success, Östbye believes. “If it’s technology driven or done bottom-up, you’re unable to take it all the way. You won’t get the resources and the data required carry out this type of transformation efficiently. That’s one of the key things I’ve learned – it has to be top-down.”

7 thoughts on ““Grundfos’ digital transformation may be the smartest ever””